From the Star Wars Merchandise Wiki.
(Redirected from TIE Fighter)
Jump to navigationJump to search 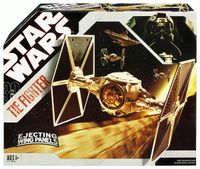 TIE Fighter comes as part of The 30th Anniversary Collection line of vehicles.

The TIE Fighter is the standard vessel of the Imperial fleet and is equipped with twin ion engines, microparticle accelerators, and hexagonal solar panels that provide impressive speed and maneuverability. However, they have no shielding or secondary systems to accommodate the large power generators, leaving their pilots with little in the way of auxiliary support during combat. TIE fighters are organized into wings and sent out in large swarms to overwhelm with numbers as well as firepower provided by two forward-mounted laser cannons.

This is a repaint of the Vintage Imperial TIE Fighter. This time it come in a white paint job. The lights and sound have been taken out and the laser area has been re-sculpted.