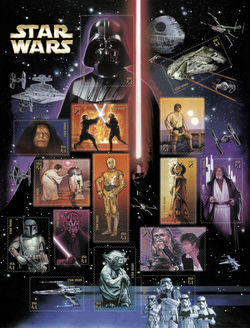 The Star Wars stamp series was a set released by the United States Postal Service (USPS) on May 25, 2007 for the 30th anniversary of Star Wars. The series is planned to continue until May 25, 2008.[1] Included are Darth Vader, Palpatine, stormtroopers, C-3PO, R2-D2 and Princess Leia, Han Solo and Chewbacca, Anakin Skywalker and Obi-Wan Kenobi, Padmé Amidala, Darth Maul, Boba Fett, Yoda, the Millennium Falcon, and an X-wing. Included in the artwork but not on individual stamps are a Star Destroyer, the second Death Star, Vader's TIE Advanced, and several TIE fighters.

From October 25, 2007 through October 25, 2008, the USPS will release a 20-stamp sheet of 41-cent Yoda stamps. Yoda was chosen to be featured on the stamp through a contest held by the USPS.