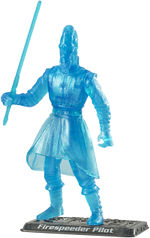 Maybe not at this level of technology, but close.

Star Wars Merchandise Wiki's IRC channel (chat room) is where meetings are held and users can talk about the site in general. It also serves as a method of quickly notifying administrators about vandalism in progress or asking questions.

You can either use the standard ShoutWiki web client in your web browser or install a specialized chat program called an IRC client. These are available for a variety of platforms.