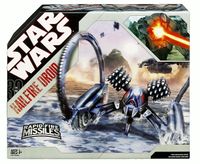 Hailfire Droid comes as part of The 30th Anniversary Collection line of vehicles.

A self-aware mobile missile-platform used by the InterGalactic Banking Clan, Hailfire Droids deliver surface-to-air strikes with their stacked banks of rocket warheads. When the InterGalactic Banking Clan pledged its forces to the Separatists (a non-exclusive arrangement, of course), its Hailfire Droids were added to the immense battle droid army.

This is a repaint of the Clone Wars Hailfire Droid, this time it features the Seperatist blue paint job seen in the movie.

This time around it's packed in TAC packaging.