From the Star Wars Merchandise Wiki.
Jump to navigationJump to search
[Source] 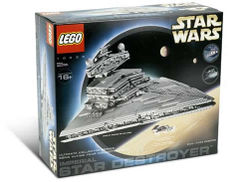 The Imperial Star Destroyer, item #10030, is a LEGO set in the Ultimate Collector's Series. It contains 3,104 LEGO bricks, mostly all gray. It is intended for ages 16+. The ISD is 37” long by 23” wide, and often it is considered by LEGO collectors to be the "bulk gray pieces" set because of the quantity of gray pieces.

It also contained a miniature version of the Tantive IV, scale to the set. There was a small card on the card included with the set that had stats, such as length and armament.